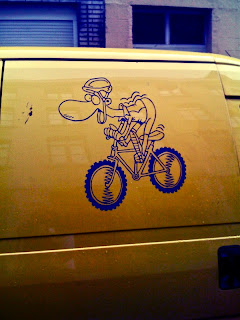 What the cobbles can feel like here in Belgium and why city bikes, despite the weight, can make such good sense.
Posted by Kate Ryan at Saturday, April 30, 2011 No comments:

I've been touring Normandy, France with friends, though not on a bike. It's been amazing, but now in Belgium, we get a bit bikey. Will post more later. For now, enjoy the pic. 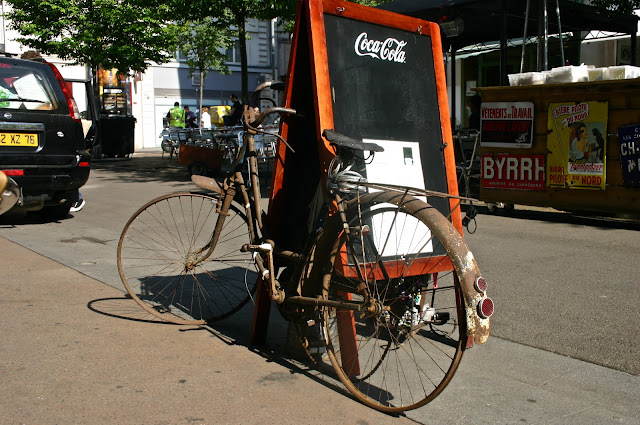 Maryland National Capital Park Police say a cyclist and a motorist collided in the crosswalk at the intersection of the Capital Crescent Trail and Little Falls Parkway today. According to Sgt. Lauryn McNeill, a man riding a recumbent bike entered the crosswalk, and as a BMW approached, both the motorist and the cyclist slowed. Then as the cyclist proceeded, the car struck the cyclist.

McNeill says the cyclist suffered superficial injuries and the driver stopped to help. The grill of the car was damaged, but the bike was ok.

The release asks all users of the Capital Crescent Trail to use extra care, especially when approaching intersections. The warm weather draws more users, so the potential for collisions goes up.

Police ask users to review the rules of the trail, wear reflective gear, and they ask that cyclists wear helmets.  They also ask drivers to use extra precaution when approaching intersections with local trails. You can get more information about trail use and trail 'etiquette' by calling the MNCPP at 240-876-6670.
Posted by Kate Ryan at Thursday, April 14, 2011 No comments:

That was the message from Ed Kohls, who sent me an email on Sine Die (the final day of Maryland's General Assembly session)  to tell me that HB 363 had passed, and was on its way to being signed into law by Governor Martin O'Malley.

But when I called him to set up a possible interview, I asked him about that.

It's not a victory, he explained, it's not a win.

Ed Kohls and his wife lost their only son, Connor, just a few years ago. A son that he will tell you was the kind of kid everyone wishes they had. A sweet, smart, funny, respectful kid who made his parents proud, just because he was such a great person. And he's gone. Because a driver went speeding through their neighborhood. And that driver took the life of their son.

Under Maryland law at that time, the driver was given points on his license and a traffic ticket. That's it. He paid a fine, $1,200 dollars.

And Ed Kohls will tell you he and his wife were subjected to a life sentence: a life without their son.

Passage of House Bill 363, which allows for jail time for drivers who kill behind the wheel doesn't make Ed Kohls and his wife whole. It doesn't end the feelings of loss they have. It simply means that another family won't lose a loved one only to find out that the person who took a life will --in the words of AAA MidAtlantic spokesman Lon Anderson, "stroke a check and walk".

I'm a reporter. My job brings me into a lot of situations where someone's private grief becomes possible public policy. But you should know a few things: You have heard Ed Kohls speak--WTOP has covered past efforts to get this law passed, and the Kohls family has gone to Annapolis two years in a row to push for change in the law--but you haven't heard his wife. She was the one who cradled the 8x10 photo of their smiling son in her arms, and who simply couldn't bear to testify, so Ed Kohls explained he'd have to do it on his own.

I cannot begin to imagine the depths of their grief. My job is to tell their story and get out of the way.  My job is to let you, the reader, the listener, take what you will from the story.

But it's clear to me, an observer, that it takes everything these families have to go before lawmakers, reporters, courts, to tell their stories in the hopes that someone, somewhere, changes the law, changes their behavior, and spares someone else the loss they've had to endure.

Will that be the case as the result of the passage of HB 363? It seems that will be up to everyone who gets behind the wheel.
Posted by Kate Ryan at Tuesday, April 12, 2011 2 comments:

Maryland House Bill 363 is due for a vote in Annapolis on Monday, and the bicycling community--and families who've lost loved ones on Maryland's roads to vehicular manslaughter--are engaged in a last minute push to convince lawmakers to pass the bill.

Ed Kohls, whose son Connor was killed by a man who paid a $1,200 dollar traffic ticket and was able to keep driving, is keeping a close eye on Maryland's House Bill 363, "Manslaughter by Vehicle or Vessel". This is the bill that passed the House and got hung up in the Senate over concerns it might be applied to broadly. It allows for a possible 3 year jail term and a fine, but the crime would still be a misdemeanor.

Delegate Luiz Simmons has been the lead on the bill, calling Maryland's current vehicular manslaughter laws "cosmically absurd". In an e-mail sent on the eve of the vote, he wrote to WTOP "We are making furious efforts to save the bill and get past second and third reader and over to the House before midnight." Simmons is not new to the fight to toughen laws on vehicular manslaughter--he's been pushing the legislation for seven years now.

Kohl, whose son was killed in 2008, has twice offered personal testimony--heard in WTOP's coverage of the bill-- about the grief he and his wife experienced, and their outrage over the fact that after killing their son, the driver was fined, only to continue driving and end up with a DUI conviction in a different case. He writes in an email to WTOP "My wife and I lost the love of our lives and must live out our life sentence every day."

While lawmakers, including Senator Brian Frosh, Chair of the Senate Judiciary Proceedings Committee, have expressed reservations about the law, Kohls insists that it's reasonable, and the language closes a loophole that lets drivers with the most egregious records get away with a traffic ticket.
Posted by Kate Ryan at Sunday, April 10, 2011 No comments:

Will Their Pedal Power Influence Lawmakers?

There's a move by cyclists to hit the road in support of Maryland's House Bill 363, the bill to change Maryland's vehicular manslaughter laws.

Friends of the late Larry Bensky plan on riding from Baltimore to Annapolis in time for a Senate Judicial Proceedings Committee hearing on the bill. You can see details the ride here.

Tami Bensky offered testimony on the House bill when it was first introduced in the Maryland House Judiciary Committee. You heard some of her testimony on WTOP, hers is the second voice in this piece

WTOP has been following the action on this bill (and bills like it in the past) expect more coverage as the bill heads to the Judicial Proceedings Committee.
Posted by Kate Ryan at Wednesday, April 06, 2011 No comments:

And finally this year, I can make it!

In year's past, I've always seemed to be on travel when Bike DC has rolled around. Not this time. I'll be there, enjoying the feel of the GW Parkway pavement under my wheels.

Making the Case...For and Against a New Vehicular Manslaughter Law

Supporters of Maryland House Bill 363, a bill supporters say would finally put teeth in Maryland's vehicular manslaughter laws--adding jail terms of up to 3 years--are worried. The bill made it out of the House, but it could stall in the Senate. Here's why: one Senator critical to getting the bill out of committee, has real reservations about it. Keep reading to see what we're reporting on WTOP and to listen to past testimony from witnesses at the House hearing earlier in the session.