The Capital Bikeshare program's Winter Weather Warrior Contest will come to an end after today, February 28th, but winter left town for one day. Sunday's warm temperatures and sunny skies packed the streets with pedestrians, and led cyclists to take to the trails. 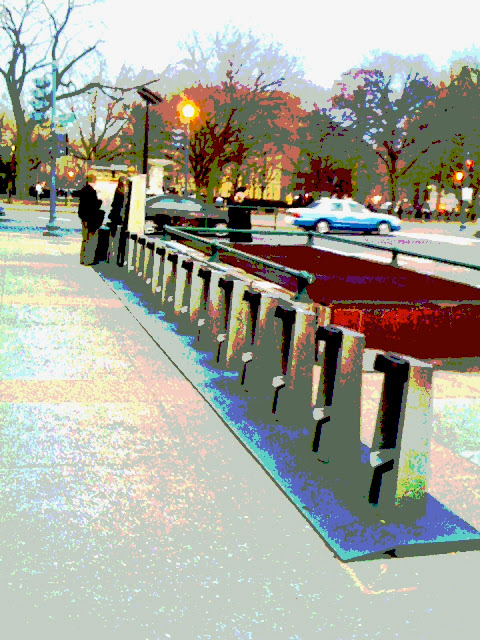 Not a single Capital Bikeshare bike to be had. I watched as the last one rolled out late Sunday afternoon--or was it early Sunday evening? No matter---people like these bikes! I even spotted one out on the Capital Crescent Trail. And the woman who was using it was smiling.
Posted by Kate Ryan at Monday, February 28, 2011 No comments:

Maryland's House Judiciary Committee has failed to get a vehicular manslaughter bill out of committee for the last 6 years. Once again, Maryland Delegate Luiz Simmons is pushing to toughen the state's laws, but even on the 7th attempt, he says he's not sure what the outcome will be. Still, he's pushing HB 363 which would make vehicular manslaughter a criminal offense with a possible 3 year jail term and $5,000 fine. It would still be a misdemeanor.
The quote in the above headline comes from Delegate Simmons. You can find more on the air at WTOP News 103.5 fm and you can read a story based on what I filed on WTOP.COM.
But here's some of the audio from witnesses in their own words. 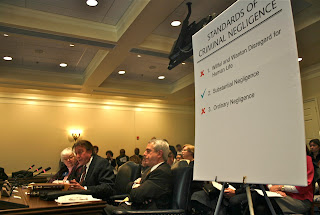 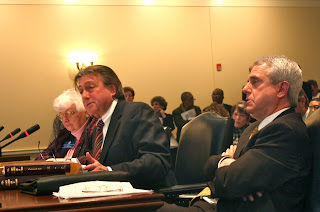 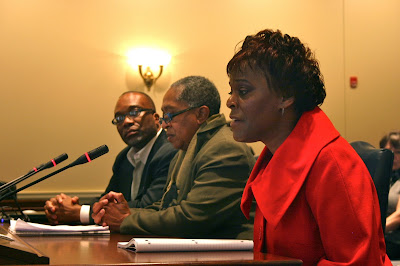 Go-or-No-Go in the Snow?

So many modes of transportation, so much snow in the forecast...

As of 7:30pm, Bike Maryland's Symposium ,scheduled for Annapolis on Tuesday, Feburary 22nd, remains on track, though if you call their offices, you'll hear that they'll update by 6:30am on Tuesday.

And will Montgomery County and US Secretary of Transportation Ray LaHood still "Love the Bus" in the snow? An event paying tribute to the hard work that school bus drivers do has been scheduled at Takoma Park ES tomorrow. Will there be a snow day instead?

Keep it stuck on WTOP 103.5fm and check back at WTOP.COM for all the latest. And no matter how you care to travel, take it easy out there. Feel free to let me know how it's going at kryan@wtopnews.com
Posted by Kate Ryan at Monday, February 21, 2011 No comments: 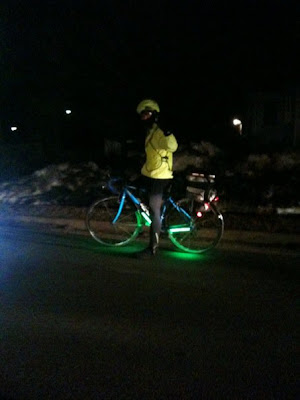 You may have seen him* on the W&OD Trail--and if you were listening to WTOP this weekend you probably heard Brett Hack, a bike commuter from Northern Virginia.

What makes Brett's story a little different: the office pool against his ability to keep his bike commuting streak going. Check it out.

And if you spot him on the commute, give a wave to a guy who laughed at Snowmageddon while powering through on studded tires.

*How could you miss him? Visibility is the key to riding safer out there. Photo credit to Mark R. Photo courtesy of Brett Hack.

Last Sunday I was just floored by the number of folks who had settled into the bike lanes for a long winter's nap--for their cars! (think the voice of Triumph the Insult-Comic dog here).

I know that Washington is seen as the home of entitlement, I get that. But what got me was the sense that these folks weren't pulling in to unload heavy items, or drop off Aunt Tilly who uses a walker. Look, I've seen folks block a bike lane temporarily, and while irritating, it's well, it's usually momentary. As in a minute or two. But this was, well, you had to drive down a long lane of bollards to settle your car in here, and you weren't back in 5 minutes. So what's up with that?

Someone else has spent a lot of time and effort trying to draw attention to the problem of bike lane hogs. Check it out.

I got a nice bit of encouragement from RAAM2011 in a past post, in which he complimented me for trying to foster niceness, and I have to say, especially as a teacher in a high school classroom, I pushed that agenda hard, but sometimes, you just want to know: how is it ok to be so rude?

I hate to invoke the mom card, but I will. Because my mom taught me better than that.
Posted by Kate Ryan at Friday, February 18, 2011 No comments:

Am I Missing Something? New Sunday Rules?

Maybe I missed the announcement that on Sundays you can park in bike lanes? 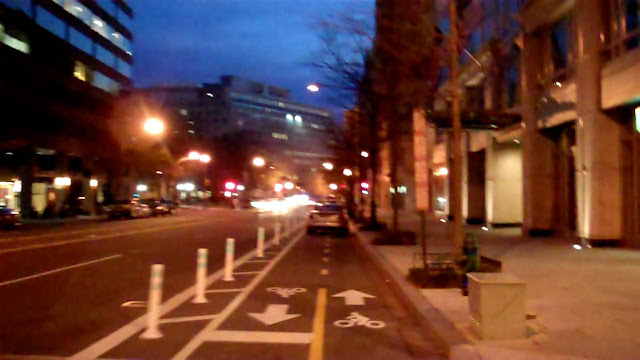 I was pretty surprised to run into (not literally-because I was forced into traffic lanes to avoid these parked cars) at least 5 cars parked in the bike lanes on 15th Street NW. The thing that really stood out: these guys had to squeeze in behind the posts designed to, you know, separate the bike lanes from the traffic lanes.

I'm well aware of what a challenge it can be to find parking in downtown DC--hunting for a spot during business hours on a weekday is guaranteed to raise your blood pressure, but what's up with this?
Anyone have an idea? 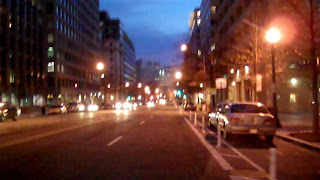 For the record, only two were out of state plates---NY and MI.

This in no way negates my lovely encounter with a perfectly nice man on Saturday who was impressed because instead of racing him to one of two parking spaces on Connecticut Avenue afternoon, I backed up so he could take the first slot, and I took the second.

As he got out of his car he joked "You canNOT be a native Washingtonian and be that courteous!" I admitted I'm no native, but I'd cop to the charge of being courteous. We laughed and shook hands.

Then I went to put a quarter in my meter and found it was broken. So I called it in. Now here's another nice encounter: I couldn't find the number on the meter to report back to the call-taker. Instead of copping an attitude or getting impatient, she simply asked me for  the block designation and I offered the number on the nearest meter as another way of giving her the closest possible location. She was so nice and friendly I told her so, and you could hear the smile in her voice.

So bike-lane-takers, you didn't ruin my weekend or really grind my gears, but what's with the lane-hogging?
Posted by Kate Ryan at Monday, February 14, 2011 2 comments: 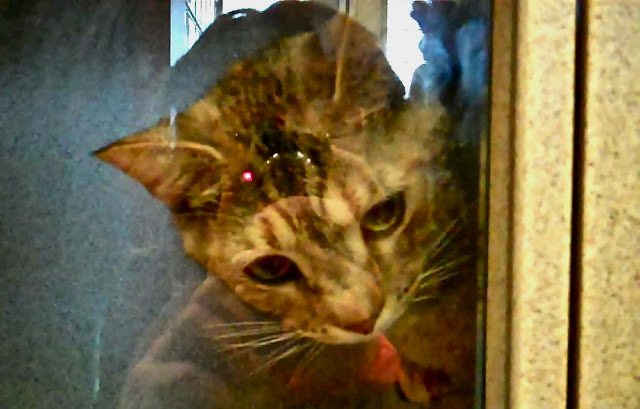 Love was in the air this weekend at the Washington Animal Rescue League's Catapalooza! 2011 event. The idea was to match up cats that are waiting for homes with people who are looking for a furry feline friend. And Cupid's magic kicked into high gear! By the time I left, 27 cats had already been matched, and more had potential adoptions pending.

Meet some of the cats and the people who love them.

Friday I attended and covered the hearing convened by DC Council member Phil Mendelson on how law enforcement is applied to cyclists and pedestrians when collisions occur.

There were more than 20 witnesses (26 by my count, but I had to leave the room to file at one point).

I filed on Friday, wrote up a web piece for Saturday, and filed two more longer form pieces also for air on Saturday.

I will put more extended info here when I get a chance, but confess that right now, as a general assignment reporter, I am all things Pepco (and MOCO, and whatever breaks...)

Did you attend the hearing? Did you find issues clarified or not? Did you get the feeling your needs will be heard and considered? Did you have your perspective shifted at all?

For now here are the pieces filed:

Sure, I was both honored and flattered to receive one of the Washington Humane Society's "Humane Hero" awards at the fabulous Sugar and Champagne event held by WHS, but  the real humane heroes are the volunteers, staffers and officers who work diligently to save the lives of animals--domestic and wild--and who help to educate all of us so we can be the best possible stewards of the animals who grace our lives in so many ways.

So here's another chance for you to recognize those folks, and maybe consider sharing your home with an animal who is waiting to find a forever home.* Check the shelters in your area, I'm sure they'd be able to hook you up ;)

*Fun fact: I followed in the footsteps of my dad in two ways. Like him, I went into broadcasting. Like him, I covered a story at a local animal shelter and brought home more than the story. (See below)


In my father's case, he brought home a big galoot of a Shepherd mix puppy who was the dog with the greatest, most generous heart I've ever had in a home. In my case, I brought home the cutest, most quirky cat I've ever had. That was 19 years ago. Miss Minky (her original name) is pictured here, and yes, this is a recent picture. She likes to say "19 is the new kittenhood." 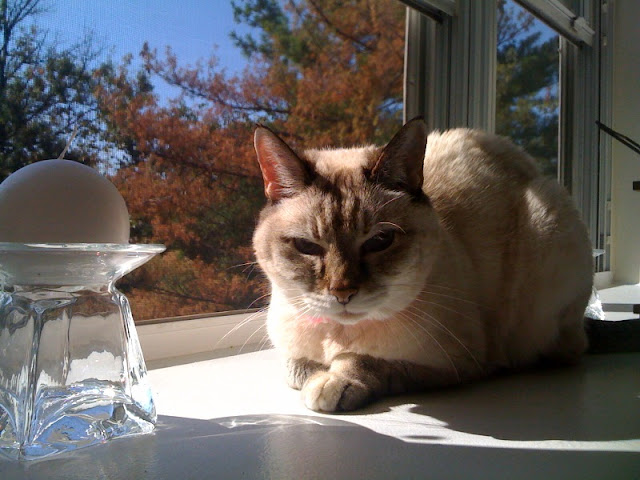 Posted by Kate Ryan at Wednesday, February 02, 2011 No comments: