Helmets: The Debate Over Your Brain Case

Ok, so here's the deal. I grew up way back when it was common for bikes to have chrome fenders and no more than 3 speeds. Banana seats were new and featured 'flower power' designs. And no one, I mean no one wore helmets. 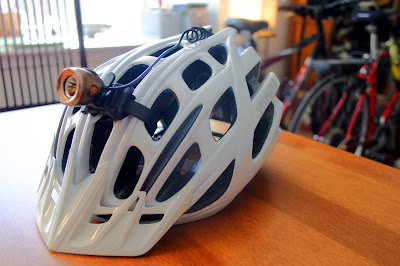 I had brothers who did things like ride a bike down a neighbor's front porch. They made it to adulthood with no obvious cognitive damage. That is to say, their lack of executive skills was evident before the stunts on bikes, but I digress.

I confess to pulling some dumb stuff too.  While I was no daredevil, I did attempt to perfect the 'no-hands' riding technique. And I was promptly ratted out by a neighbor who let my mom know that her daughter was not exactly safety patrol material.

The funny thing is, I also had a very serious chicken streak. Even as a kid, I paid attention to headlines, and freak accidents were duly noted. So you weren't about to catch me on the ferris wheel at a local amusement park. I'd quietly wonder how long it had been since a safety inspector had checked the equipment, and opt out.

My point? I pick and choose the risks I take each day.  I took and still take only calculated risks, but not many. Helmet or no helmet, You will find me braking at stop signs and coming to a dead stop at stop lights. I wear neon yellow, have a fabulous little bike light set up and generally ride like a geezer, figuring that's how I'll get to be a geezer, by riding with care.

But  I confess: I went on the Tweed Ride without a helmet. Why? Has getting more confident with urban riding (since ditching my car) made me reckless and unleashed a death wish?

It's just that the more I bike and the more I bike in different settings, the more I've wondered, how necessary are helmets? After all, I rode bikes all through childhood, adolescence and early adulthood without so much as a nasty spill.  But now I ride in traffic. City, not suburban traffic (you could argue that city traffic is in fact, safer, but that's a whole other blog entry). So maybe the helmet is even more necessary.

I will say these are academic questions that roll around in my typically-helmeted head. And there are studies on both sides of the argument. No doubt you've seen them cited over and over again on different web sites. If you haven't, just google bike helmets, and take your pick of positions.

For me, the helmet is not the solution to the problem of crashes and injuries; but it is an extra layer of protection, like a seat belt. Just as seat belts don't prevent crashes, they do minimize the impact of possible impacts. I look at helmets the same way.

Some argue helmets offer a false sense of security, that normally careful riders suddenly become more aggressive and reckless. I don't.  I don't depend on the helmet, I depend on my own defensive riding and the idea that following  the rules of the road reduces my risk. I am a cautious rider. I do stop at intersections,  signal my intentions to drivers, and really do think as I head out the door; if I'm not careful, I could get hit and seriously hurt out there, even just going out for groceries or riding to meet up with friends.

So I set out for the Tweed Ride without a helmet, rode without one, rode back home after a lovely dinner with friends, without my helmet. And survived.

Still, things do happen. A rider in my group did take a spill, literally going head over heels when he became distracted and gripped the brakes on one handle bar and not the other. How did he land? He rolled, shoulder, shoulder blade, to back. Was he lucky? You bet.

I myself had a lovely ride to the ride, and back from the ride. No mishaps for me. Was I lucky? You bet.

So I'll ditch the helmet, right?
Um, no.

While  I fully recognize that while it can't prevent me from suffering a close encounter of the vehicular kind, I do think my helmet  can help me avoid serious neurological damage should I end up one with the pavement. There are many who dismiss this line of thinking, and I understand that.

I recall my first trip to Belgium, a bike friendly culture second only to say, that in the Netherlands. I was renting a bike and asked why no bike rental shop seemed to offer helmets. The young clerk answered only half-joking, "We Belgians know how to ride our bicycles." I thought that was certainly true. I witnessed plenty of awesome bike-handling skills as moms with kids on front and back traveled right alongside trams and behind buses in rush-hour traffic and did so effortlessly. I watched kids ride one-handed while steering a second 'vacant' bike with their other hand.

But the Belgians had more than their bike skills going for them. They had--and have--superior infrastructure and tough vehicular laws. What they don't have is American drivers on their tails. No dissing of  you drivers--I am a driver too--but you have to admit we have a very different mentality to 'sharing' the road with bikes. We generally don't want to, and some drivers make that abundantly clear in a way that persuades me that  helmet hair is not such a bad thing. So, until our culture shifts, I see a helmet in my future. (Plus they make the world's best accessories for lights...I love riding at night and being able to send out a beam of light whichever way I turn my head. It makes pothole detection much easier.)

All that said, I don't jump all over those who choose not to wear helmets. It's a choice.
Posted by Kate Ryan at Thursday, November 18, 2010